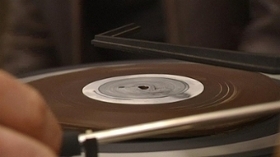 “Fife [Scotland] baker Ben Milne may be used to his friends Ziggy and Tommy making sweet, sweet music, but now he’s given it a go himself with the creation of a playable 7 inch single made entirely of chocolate.

The delicious record, which plays a recognisable version of Anti-Climb Paint by Edinburgh-based band Found, works on all record players and is completely edible. Even the paper label can be eaten.

The idea came to baker Ben when he and his friends from the band decided to do something together. His first attempt saw him pour molten chocolate on to a regular vinyl disc, but he found out that it played the reverse of the song.”

[He ultimately used the same template that the vinyl discs themselves are pressed from].

Either I’m hungry or this is really sexy.  A couple of issues, though:  I imagine you could only play the record like twice before the soft chocolate grooves degrade to the point of becoming unlistenable, and the chocolate would probably REALLY jack up your needle.  Super cute though.  Party/Wedding favor?

more from Scotland’s STV website, including video of the record playing. 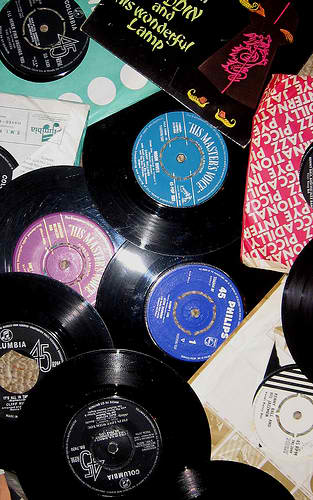 In a world where advancing technology is the indication of progress in the arts – books and magazines are being replaced by e-readers and iPads and telephones that aren’t “smart” have become historical artifacts – where does nostalgia fit in?  Apparently, it’s found a nice home in the music industry, where record sales– of actual vinyl LPs and EPs— have been experiencing a renaissance. 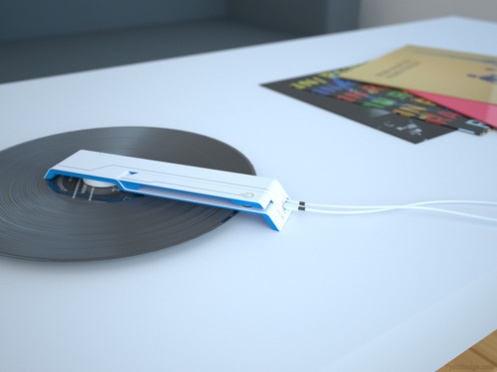 The little guy pictured above is a Linos Portable USB vinyl record player (never would have guessed it). How does it work, you ask? 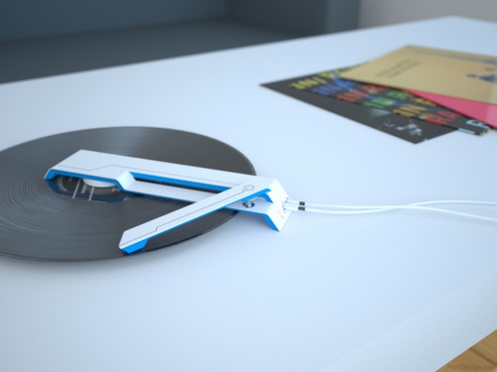 Hook the wire into your computer. The bar has two parts. Take out the bottom base, place the long play album or single on top, and then sandwich it with the overarching top. To start playing, move the player arm into position. Bananas, right? Pop it in your pocket and you’re good to go (so long as you have a computer or something that accepts a USB cord handy).

Probably not the best option for that $200 impossibly rare mint copy, but cool beans for that $1.99 joint. Definitely a fun choice for a beginning collector.

thanks to Gizmodo for the info.